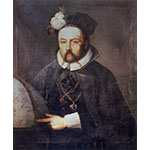 Born into a noble family, Brahe began his studies in 1559 in Copenhagen, then went to Leipzig. He cultivated astronomy in secret. He entered the University of Rostock in 1565, and the University of Basle in 1568. In 1570, he built his first large astronomical quadrant in the garden of the consul of Augsburg. In 1572, on returning to Denmark, he measured the diurnal parallax of the bright star that appeared in the constellation of Cassiopea. In De nova stella (Copenhagen, 1573), Brahe explained that, given the absence of parallax, the nova was not an atmospheric phenomenon - as argued by Aristotelian philosophers - but lay beyond Saturn, in the sphere of fixed stars. In 1575, Brahe went on a long journey to Venice. On his return home, King Frederick II of Denmark (1534-1588) commissioned him to establish an observatory on the island of Hveen. In 1577, during the construction work, a large comet appeared. As with the nova, the modest diurnal parallax led Brahe to conclude that the comet was not an atmospheric phenomenon either, but a celestial body moving around the Sun. This finding undermined the Ptolemaic system: in its circumsolar motion, the 1577 comet should have crossed the crystal spheres of Mercury, Venus, the Sun, and Mars. After completing the Uraniborg observatory in Hveen, Brahe dealt the final blow to the Ptolemaic system by observing that Mars in opposition was closer to the Earth than to the Sun. However, as a believer in the Earth's immobility, he rejected the Copernican system. In De mundi aetherei recentioribus phaenomenis (Uraniborg, 1588), he presented his own geo-heliocentric system. The Moon, the Sun, and the stars revolved around the fixed Earth, while Mercury, Venus, Mars, Jupiter, and Saturn revolved around the Sun and were pulled by it around the Earth. The repeated spending cuts by the new king, Christian IV (1577-1648), drove Brahe to hastily perform the final observations needed to compile his catalogue of about 1,000 stars and to leave Hveen in 1597. After a long journey across northern Europe, Brahe was called to Prague in 1599 by Emperor Rudolf II (1552-1612). In the last two years of his life, dedicated to defining his system of the world, Brahe was assisted by Johann Kepler (1571-1630), to whom he bequeathed a massive corpus of observations.