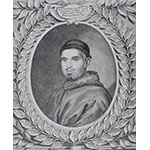 Venetian friar of the Franciscan order of the Minorites, was the Mapmaker and Cosmographer of the Republic of Venice. Produced celestial and terrestrial globes of different sizes and was one of the leading representatives of Italian globemaking art. In addition to the works in the possession of the Museo Galileo of Florence, his more noteworthy productions include the two entirely manuscript globes of about four meters in diameter built for Louis XIV (1638-1715), King of France. He drew many geographic maps published in atlases including the Atlante veneto (Venice, 1691) and the Isolario (1696-98). Also of special interest are the first seven volumes of the Biblioteca universale sacro-profana, the first encyclopedia arranged in alphabetical order, which was initially supposed to run to 45 volumes. In about 1684, he founded the Accademia Cosmografica degli Argonauti in Venice. But Coronelli was not only a mapmaker. In fact, he took an interest in many areas of science. A fairly well known figure across Europe, he played a lively part in the scientific discussions over the astronomical discoveries of Galileo Galilei (1564-1642), Johannes Kepler (1571-1630), and Isaac Newton (1642-1727). He was also a friend of eminent scientists of his day such as Edmond Halley (1656-1742) and Giovanni Domenico Cassini (1625-1712).