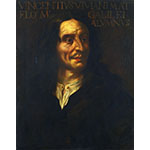 Vincenzo Viviani studied mathematics at the Scolopian school under the guidance of Clemente Settimi (1612-?), a Galilean. He developed a deep affection for Galileo (1564-1642), whom he assisted from October 1639 until the Pisan scientist's death. Ferdinand II (1610-1670) and Cosimo III (1642-1723) appointed Viviani to key official positions. He was a leading participant in the Accademia del Cimento, proposing many experiments. For many decades, he also served as engineer to the Magistratura di Parte Guelfa [Magistrature of the Guelph Party]: in this capacity, he was responsible for waterway regulation and territorial supervision.

In his long career, he published many mathematical works, nearly always conceived as elaborations of the Galilean heritage. He celebrated the Master's memory and kept it alive, for example by editing a substantial edition of Galileo's works (Bologna, 1656). In 1654, he composed the Racconto istorico della vita di Galileo [Historical account of Galileo's life] in the form of a letter to Prince Leopold de' Medici (1617-1675). Unpublished until 1717, this biography was later well received. Viviani dedicated much time to the systematic collection of documents and letters by Galileo and eyewitness accounts. He left a legacy in his will for the erection of a sepulchral monument to Galileo in the basilica of Santa Croce in Florence. On the façade of his house - on the street now known as Via San Antonino - he put up a bust of Galileo flanked by two long commemorative inscriptions.