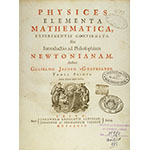 Dutch physicist who made the greatest contribution to disseminating Isaac Newton's (1642-1727) natural philosophy outside England. During a stay in London, he met John Theophilus Desaguliers (1683-1744) and John Keill (1671-1721), from whom he borrowed the method of teaching the principles of physics through experiment. On his return to Holland, was appointed professor of mathematics and astronomy (and, later, philosophy) at the University of Leiden. In his introductory treatise on Newtonian natural philosophy, he described a physics course to be taught with the help of a series of instruments, many of them his own inventions. These came into standard use in contemporary physics collections. The work of 's Gravesande had a powerful influence on experimental physics for most of the eighteenth century. Many mechanical instruments in the Museo Galileo were built on his models.