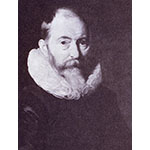 Author, printer, and publisher of geographic maps and globes, which Blaeu signed until 1621 with the Latinized name of Guljelmus Caesius. Pupil and friend of Tycho Brahe (1546-1601), from whom he acquired the astronomical expertise that he applied to his own work. Blaeu usually relied on contributions from scientists and geographers who prepared original maps for him. Despite his wide-ranging knowledge, he was not always able to evaluate the accuracy of his maps, as he often depended on information contained in incomplete and imprecise travel narratives. In addition to his many popular celestial and terrestrial globes, his works include the Theatrum mundi, a major geographic atlas published under the editorship of his son Joan (c. 1598-1673) between 1663 and 1667, and an Astronomical instruction for the use of globes and celestial and terrestrial spheres (Amsterdam, 1642). Blaeu's works are true masterpieces that set a long-unmatched standard of perfection.