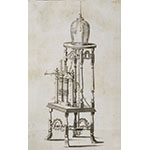 The Aristotelian horror vacui, i.e., the conceptual rejection of the existence of vacuum, was challenged by Galileo (1564-1642). In c. 1643, one of his disciples, Evangelista Torricelli (1608-1647), demonstrated that the level of mercury in a tube sealed at the top (barometer tube) stabilized at a height of c. 76 cm, creating a vacuum in the space above. This experiment inaugurated a long series of discussions and observations on the nature of vacuum.

The first rudimentary air pump—a sort of syringe—was developed c. 1650 by Otto von Guericke (1602-1686). He used it in his celebrated "Madgeburg hemispheres" experiment to demonstrate that two metal hemispheres, when joined together and evacuated, required the force of at least sixteen horses to be pulled apart.

In the second half of the seventeenth century and in the eighteenth century, Robert Boyle (1627-1691), Robert Hooke (1635-1702), Francis Hauksbee (1660-1713), Denis Papin (1647-1714), and others designed and perfected new types of vacuum pumps. Fitted with one or two crank-operated cylinders, a rod, or gear and rackwork system, they became one of the most important apparatuses in physics laboratories. The same period saw an increasing number of pneumatic experiments and demonstrations, such as the one to prove that sounds cannot travel in vacuum or that a small animal placed under the pump bell-jar will die of asphyxia. Pumps also allowed the first observations on electrical discharges in rarefied gases.

From the late eighteenth century onward, the most common air pumps were the two-cylinder versions. With further refinements, they remained in use in the nineteenth century. After 1850, mercury air pumps were introduced. While slow to operate, they generated stronger vacuums than those obtained with piston pumps. Mercury pumps were widely used to evacuate vacuum tubes for electrical discharges in gases, X-ray tubes, and electric light bulbs. Air pumps operate either by means of the to-and-fro motion of a mercury column (Geissler pump), or by means of mercury droplets falling in a tube and trapping the gas to be evacuated (Sprengel pump). Small pumps in which gas molecules were swept away by a jet of water became common in laboratories for purposes such as filtering, where a moderate vacuum suffices.

In the early twentieth century, advances in precision mechanics and a better understanding of gas behavior fostered the development of rotary pumps and diffusion pumps. The latter, which have no moving parts, exploit the kinetic properties of gas molecules to obtain much stronger vacuums than those produced by mechanical pumps.

Today, vacuum technology has become critical in laboratories (one example: the rings of giant accelerators, in which ultra-high vacuum must be maintained) and for industrial applications such as vacuum packing.