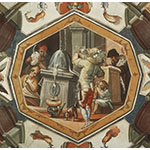 The term alchemy derives from the Arabic noun al-Kìmiya. Opinions differ on the origin of the word Kìmiya, but it probably comes from the Greek chyma, which denotes the fusion and purification of metals—simple substances characterized by a single specific behavior.

The science or art of alchemy is very ancient. Practiced well before the Christian era in various parts of the world, it sought to perfect the aims of Nature, turning base metals into gold, and endowing people with longevity and immortality. Perfection was to be attained through the effects of a preparation—the philosopher's stone for metals, the elixir of long life for humans.

Alchemy spread from the Arab world via North Africa, Spain, and Sicily to the West in the twelfth century. The magical-alchemical tradition provided substances, instruments, and processes to chemical investigation, but chemistry developed in a totally different cultural context, rejecting alchemy's sacerdotal and esoteric conception of knowledge.