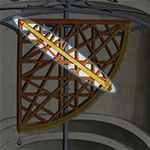 The small revolving rod (in Arabic, al-'idada) fixed to the center of the goniometric scale plotted on the front or back of many ancient astronomical and surveying instruments: quadrants, planispheric astrolabes, graphometers, etc. Two pins, called sights, are attached perpendicularly to the alidade. They carry holes through which the observer can aim at a particular object. An index, often consisting of the edge of the alidade itself, shows on the goniometric scales the angle between the line of sight of the targeted object and a predetermined axis; in astrolabes, for example, this axis consists of the vertical of the observation locality. Before the diffusion of Islamic astronomy in late medieval Europe, the alidade was called diopter (from the Greek diá = through and opteyo = observe, hence dióptra = instrument through which one observes). This term, however, caused confusion between the true alidade and ancient instruments such as Hipparchus' diopter (2nd century B.C.E.) and Heron's diopter (1st century C.E.).