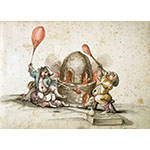 The vases and glasses in the Accademia del Cimento glassware collection display highly specific patterns. These can be found in contemporary documents, and some were typical of Venetian glassmaking. The objects were produced with different techniques: 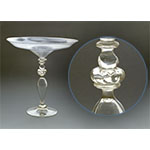 The French expression describes many blown-glass objects produced in the sixteenth and seventeenth centuries by the Murano glassmakers and by craftsmen imitating their style in Holland, Belgium, Spain, and Tuscany. 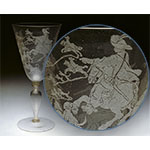 Process for hollowing, engraving, or scratching glass and crystal surfaces. Always carried out with a grinding-wheel or diamond point. 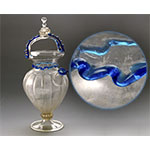 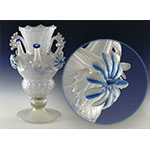 Typical Tuscan process used at the Medici glassworks as early as 1591. Involved shaping glass parts under the heat of a lamp. The method served to make small objects—mainly flowers—but also birds, dolphins, and other animals. Actually, lampworking reached Tuscany even earlier. By 1587, glassmakers producing small lampwork items were accommodated in the craft workshops on the ground floor of the Uffizi. 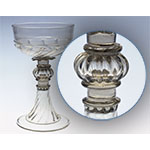 Technique that consists in applying to the base of a blown glass object—still attached to the blow-pipe—a second layer of glass, which is then stamped in an open mold to give it a decorative ribbed or rod-like pattern.