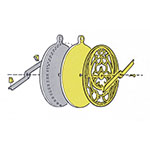 The long tradition of planispheric-astrolabe manufacturing soon led to the adoption of a "standard" for the marks engraved on the front or back of the instrument (graduated circles, hour lines, and so on) as well as for the number and design of its components. Some of these parts are, however, also common to the various models of universal astrolabe and to the nautical astrolabe. 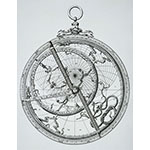 The front side of the planispheric astrolabe (or of the universal astrolabe) displays the limb of the mater, the tympanum, the rete, and, in some models, the rule. By setting the front, i.e., by rotating the rete around the mater, one can depict the appearance of the heavens as determined by observation in order to obtain a time value from the instrument. Alternatively, by configuring the rete for a given day, one can perform several astronomical computations such as the rising, culmination, and setting of the Sun, Moon, planets, and stars. 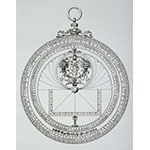 Side of the planispheric astrolabe opposite the hollow of the mater, tympanum, and rete. At its center is hinged the alidade, whose rim slides on a set of graduated circular scales engraved on the mater. The number of scales varies from one instrument to another. On this face the user can perform observations and read the data needed to set the front side of the instrument in the proper position. 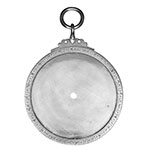 Body of the planispheric astrolabe (or universal astrolabe). It is a thin circular plate, with a hole in the center. It has a thicker, raised, and graduated edge, called the limb. The hollow of the mater holds the tympanum and the rotating rete. The upper part of the mater carries a jointed ring, called the throne. By slipping one's thumb into the ring, one raises the instrument so that its weight and symmetrical design keeps it perpendicular to the ground. On the back of the mater are engraved several circular scales, among which the following deserve mention here:

- Graduated scale. Divided into 360° with a subdivision into four 90° quadrants. Indicates the zenith distance or altitude of the celestial body at which the alidade is aimed;

- Calendar scale. Divided into months and days; sometimes combined with a corresponding zodiacal calendar, subdivided into 12 signs of 30° each. Determines the Sun's position on the ecliptic on the selected day;

On planispheric astrolabes used for land surveying, the back of the mater also carries the shadow square. 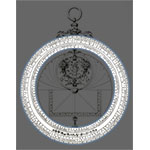 Raised edge of the mater of the astrolabe, bearing a scale divided into 360°. The limb is the reference against which the rete is rotated in the computation process so that the planispheric astrolabe will simulate the sky's appearance on a given day at a specific hour. Vice versa, the limb can be configured from the observation of the altitude of an celestial body on the horizon. In that case, the limb will indicate an angle that, thanks to the hour scale on the back, can be converted into the hour of day or night. 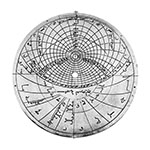 Thin brass plate inserted into the mater of the planispheric astrolabe. Carries the grid of altazimuth coordinates shown in polar stereographic projection for the latitude of the specific observation locality. In addition to the main vertical circles and the main almucantars (altitude parallels), the tympanum reproduces some elements of the celestial sphere—the celestial equator and the tropics of Cancer and Capricorn—as well as the hour lines for determining the unequal hours of day or night respectively from the Sun's position on the ecliptic or from the altitude of a star marked on the rete.

If the observer travels and changes latitude by a few degrees, the initial tympanum is replaced by another in the set of accessories typically supplied with a specific planispheric astrolabe. By contrast, if the instrument is designed for use in a single locality, there is no tympanum and the corresponding markings are engraved directly on the front of the mater. 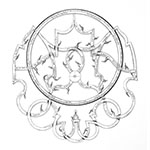 The rete (from the Latin aràneam = spider's web) is the most characteristic part of the planispheric astrolabe (or of the universal astrolabe). It is held against the tympanum by the horse, but can rotate freely in the mater around the pin.

The fine perforations on the rete give a stereographic projection of the basic elements of the celestial sphere: the graduated circle of the ecliptic (on which to determine the position of the Sun), a circular segment of the celestial equator (near the summer solstice), a section of the Tropic of Capricorn, and the equinoctial colure. Using these basic elements of the celestial sphere as reference points, the rete shows a number of fixed stars—typically between 20 and 30—deemed useful in astronomical computations. The position of each star is shown by a distinctive pointer. 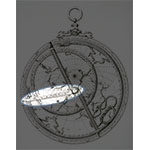 After finding the Sun's position thanks to the calendar scale on the back of the mater, the observer could record it—using the rule (or index) as a pointer—on the graduated ecliptic circle engraved on the rete. At the same time, the extension of the rule indicates the rete's position relative to the graduated scale etched on the limb of the mater. 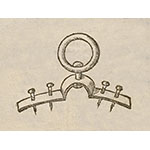 Characteristic jointed ring placed at the upper end of astrolabes (but also of many other instruments). By slipping one's thumb into the ring, one raises the instrument so that its weight and symmetrical design keeps it perpendicular to the ground.

Inserted in the back of the mater, the pin enables the main parts of the instrument—the alidade, the rete, and the index—to rotate freely around the common center of the mater and the tympanum.

The small prominence that, inserted into a slit in the pin, prevents the parts of the instrument from coming loose when in use. The part owes its name to the fact that astrolabe-makers would often shape it into a horse's head. 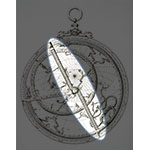 The small revolving rod (in Arabic, al-'idada) fixed to the center of the goniometric scale plotted on the front or back of many ancient astronomical and surveying instruments: quadrants, planispheric astrolabes, graphometers, etc. Two pins, called sights, are attached perpendicularly to the alidade. They carry holes through which the observer can aim at a particular object. An index, often consisting of the edge of the alidade itself, shows on the goniometric scales the angle between the line of sight of the targeted object and a predetermined axis; in astrolabes, for example, this axis consists of the vertical of the observation locality.