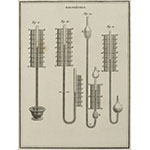 In a famous experiment of 1644, Evangelista Torricelli (1608-1647) filled a glass tube with mercury, closed it at one end, and turned it upside down in a small basin also filled with mercury. He observed that the mercury column did not descend completely into the basin, but remained at a height of about 76 cm from the open end of the tube. Torricelli correctly identified atmospheric pressure as the cause of the phenomenon. Experiments later performed across Europe established that the level of the mercury column varied with the changes in atmospheric pressure at different altitudes. This led to the development of a new instrument—the barometer—which was soon used for weather forecasting. Later models were built in different shapes and sizes. Many design changes made the instrument more sensitive, simpler to read, and easily transportable. In the nineteenth century, the barometer became a very popular instrument for "telling the weather" in middle-class homes and public places. By c. 1850, the aneroid barometer—compact, rugged, and easy to carry—had became an international fixture. 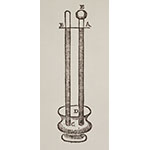 Instrument directly derived from the Torricellian experiment. The lower end of the barometric tube stands in a basin filled with mercury. The changes in the mercury level corresponding to the variations in atmospheric pressure are read on the tube. 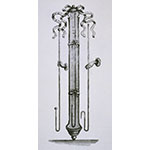 In this type of barometer, atmospheric-pressure variations are recorded through changes in the level of mercury in a U tube (siphon), whose shorter arm is open. 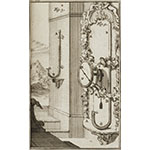 A special type of siphon barometer invented by the English scientist Robert Hooke (1635-1702) c. 1664. Thanks to a system of floats and pulleys, the changes in mercury level are translated into the movements of a pointer on a dial. 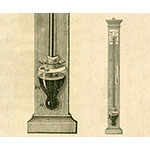 In this model, the barometric tube, containing mercury, stands in a vessel also filled with mercury, whose bottom consists of a leather membrane. By changing the position of the membrane, the mercury can be made to rise in the tube until it is completely filled. This prevents sudden movements of the mercury, thus making the instrument easier to transport. 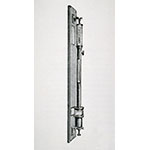 This portable model was developed by the French scientific-instrument maker Nicolas Fortin (1750-1831). The cistern is partly made of glass; the bottom is made of leather. A screw is used to compress the leather and calibrate the barometer by adjusting the lower mercury level to coincide with a reference mark. 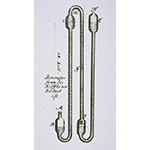 Barometer whose tube displays several bends or "folds"; the vertical arms are filled alternately with mercury and a liquid serving both as a level indicator and a medium for transmitting the mercury's movements. Folded barometers are shorter and more manageable than standard mercury versions, but less precise. First described by Guillaume Amontons (1663-1705) in 1688.

Model invented by Marsilio Landriani (1751-1815), who gave it the name "stereometric barometer." Thanks to a tap, the mercury in the cistern can be made to flow into a graduated and calibrated tube, where its quantity can be measured. 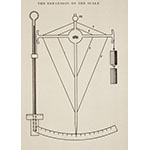 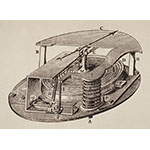 Instrument basically consisting of a metal capsule in which a partial vacuum is produced. The capsule expands or contracts with the changes in pressure; its movements are transmitted to a pointer by mechanical means. Although similar designs had been developed previously, the classical aneroid barometer was perfected by the Frenchman Lucien Vidie (1805-1866) in the 1840s. 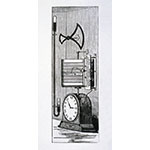 Instruments that record changes in atmospheric pressure over time (on a ribbon or paper roll moved by a clockwork mechanism) are called "recording" or "self-registering." Many recording barometers are aneroid.