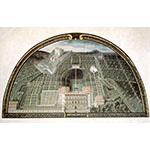 The Pitti Palace was acquired by Eleonor of Toledo, wife of Cosimo I de' Medici (1519-1574), in 1549. The garden was expanded and redesigned by the architect Niccolò di Raffaello de' Pericoli, called Il Tribolo (1500-1558), who was succeeded by Giorgio Vasari (1511-1574), Bartolomeo Ammannati (1511-1592), and, in 1569, Bernardo Buontalenti (1536-1608). The garden was adorned with statues and "grottoes," as documented by the lunette painted by the Flemish artist Giusto Utens (?-1609), which shows the original plan. The garden was further enlarged in the seventeenth century: between 1630 and 1634, Giulio (1571-1635) and Alfonso Parigi (1606-1656) converted the greenery amphitheater into a walled construction, and the labyrinths, thickets, and Isola basin were built; in 1636, the statue of the Abbondanza begun by Giambologna (1529-1608) and completed by Tacca was installed. Highly sophisticated waterworks and fountains were installed between the late sixteenth century and the first half of the seventeenth. In 1677, Grand Duke Cosimo III de' Medici (1642-1723) ordered the construction of a menagerie for the rarest and most curious animals in his possession. The eighteenth century saw the most significant changes. These include the foundation, in 1737, of the Orto Botanico [Botanical Garden], later incorporated into the Museo di Fisica e Storia Naturale.