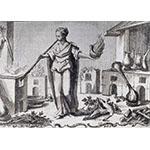 Chemistry is the science that deals with the properties and reactions of substances. Historically, it derives from a wide variety of interests and operating practices. As a distinct discipline, it is a product of the Scientific Revolution: in seventeenth-century science, we find a chemical philosophy whose main goal was to discover the properties and structure of matter. This pursuit had its theoretical roots in the works of Paracelsus (1493-1541).

Unlike astronomy and mechanics, chemistry did not emerge from a consolidated tradition; nor can it be regarded as a direct offshoot of alchemy. Chemical issues were also addressed by medical, pharmacological, mineralogical, and philosophical research as well as in craft practices. Chemistry developed as an autonomous branch of knowledge through intricate, complex paths. It cannot be described as a separate discipline, endowed with its own concepts and methods, until the late eighteenth century and the achievements of Antoine-Laurent Lavoisier (1743-1794). The chemist did not become a socially recognized professional until the early nineteenth century.