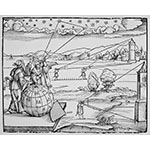 In the Middle Ages, the operating principle of Hipparchus's diopter of four cubits (c. 1.7 m) was extended to the measurement of angles greater than the apparent diameters of the Sun and Moon. This resulted in the bacolo [in Italian] or Jacob's staff, whose name traditionally recalls the person regarded as its inventor: Jacob ben Machir ibn Tibbon (Profatius; c. 1236-1305).

The instrument consisted of two rules of different lengths. The short rule was mounted perpendicularly to the long rule and could slide on it. The long rule was divided into equal parts, called "houses," identical in length to the short rule. This simple design facilitated the instrument's diffusion and the creation of variants for specific uses.

The astronomical version was known as the radius astronomicus, used by Johan Müller from Königsberg (Regiomontanus; 1436-1476), Peter Bienewitz (Apianus; 1501-1552), Reiner Gemma Frisius (1508-1555), Tycho Brahe (1546-1601), and many others. The radius measured the angle of separation between two celestial bodies. The observer would place his eye at one end of the long rule (four cubits in length). He would then slide the short rule until its ends—fitted with sights—were aligned with the two celestial bodies. Thanks to a table of tangents, the ratio of the length of the short rule to its distance from the eye yielded the angle of separation between the two bodies.

A different model—called balestriglia in Italian—was developed for navigation. Smaller and easy to handle, it was used until the seventeenth century to determine the latitude of a location from the altitude of the Sun or another celestial body on the horizon. The balestriglia consisted of a long rule fitted with three or four short, interchangeable vanes of different lengths.