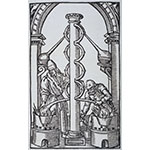 Process in which a liquid solution is broken down into "fractions" of different volatilities through a sequence of boiling and condensation of vapors. For alchemists, distillation served to extract the "quintessence" of liquids, i.e., their most essential part.

The alembic still was designed so that the vapor would rise, condense in the still-head (or helm), and then flow through one or more side tubes into a receiver.

The same basic model of alembic was used in western Europe from about the twelfth century onward; the cooling efficiency was improved by immersing the tubes or the still-head in water.