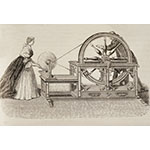 Frictional machines rely on the fact that some insulating substances such as glass, sulfur, and resin become electrically charged when rubbed vigorously. In 1660, Otto von Guericke (1602-1686) used a sulfur ball that attracted light bodies after being electrified. This provided him with an illustration of his theories on forces acting in the universe. The first true electrical machine was built c. 1700 by Francis Hauksbee (1660-1713): a glass globe (that could be evacuated) rotated rapidly by a pulley and rubbed with the hand became electrified, allowing various observations on electrostatic attraction and repulsion and on electrical discharges in a vacuum. In the following decades, and especially after the invention of the Leyden jar in 1745, countless models of electrostatic machines were developed, in which glass globes, cylinders, and disks were rotated rapidly by pulley-and-handle systems. To rub them and thus electrify them, padded leather cushions were introduced as efficient substitutes for the experimenter's hand. The charges generated were stored on large insulated metal conductors.

Toward 1750, the vogue for electrical experiments made the electrical machine an essential instrument in all scientific laboratories and collections, often used for therapeutic purposes. Specimens of different sizes were built. The largest, commissioned by the Dutch scientist Martinus van Marum (1750-1837), had two coaxial disks 165 cm in diameter operated by two men turning handles. The machine was capable of producing charges of hundreds of thousands of volts, generating sparks over 60 cm long. The smaller, portable machines were generally used for the controversial therapeutic applications of electricity.

In 1775, the Italian physicist Alessandro Volta (1745-1827) invented the electrophorus, a simple but ingenious instrument that provided an almost unlimited series of electrical discharges. From it derived the first induction electrical machines, which generated electricity not by rubbing but by a complex set of electrostatic inductions. This category includes "doublers" or "multipliers" developed in the late eighteenth century and used to "multiply" charges too weak to be measured. In c. 1830, the physicist Giuseppe Belli (1791-1860) designed the first rotating-disk induction machine, but it was only in the second half of the nineteenth century that this type of generator almost entirely replaced the old frictional machines—thanks to physicists such as Wilhelm Holtz (1836-1913), August Toepler (1836-1912), and James Wimshurst (1832-1903). From the early twentieth century on, induction electrical machines were used extensively to generate electrical discharges, to charge condensers, to power X-ray tubes, and for electrotherapy. The introduction of more efficient systems, such as transformers, to produce high-voltage currents led to the abandonment of induction machines, which are now of purely historical and educational interest. But there is an exception: in the late 1920s, the physicist Robert Van de Graaff (1901-1967) invented a ribbon electrostatic generator for producing the very high voltages needed in the emerging science of atomic and nuclear physics. Today, this type of machine, with substantial improvements, is widely used in research laboratories and for industrial applications.