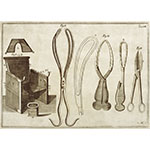 Invented by a member of the English Chamberlen family (perhaps Peter) c. 1674. Their main disseminators were André Levret (1703-1780) and William Smellie (1697-1763), both of whom made some structural improvements. By the late eighteenth century, forceps were a well-known, standard obstetrical instrument.

Ordinary forceps consist of two intersecting shafts hinged together at their center. Each shaft has four parts: blade, shank, lock, and handle. The blade is designed to be applied to the head of the fetus and is specially shaped for the purpose.

Forceps are used to correct an adverse position of the presented part and to enable the obstetrician to replace the expulsive force with a traction of the fetus so as to complete the delivery.

The wax and terracotta models exhibited in the Museo Galileo illustrate the Levret forceps, brought to Florence by Giuseppe Vespa (1759-1840) in the second half of the eighteenth century, and disseminated through his school across Italy.

Today, forceps are rarely used, because of the damage they can cause to either the mother or the child. They are replaced by Cesarean section in nearly all indications.