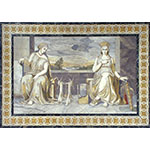 Hydrostatics studies the laws of the equilibrium of fluids, while hydraulics is mainly concerned with practical problems relating to the motion of water and the use of its force. Several important observations on bodies immersed or floating in water are attributed to Archimedes (287-212 B.C.E.), and dozens of different hydraulic apparatuses were known since antiquity.

Galileo (1564-1642) studied the phenomena of bodies immersed in water, proposed a different version of the hydrostatic balance, and made some interesting observations on pumps. In the seventeenth century, Blaise Pascal (1623-1662) clarified the basic concepts of hydrostatics, while in the eighteenth century Leonhard Euler (1707-1783) and Daniel Bernoulli (1700-1782) laid the foundations of modern hydrodynamics.

Eighteenth-century collections of scientific instruments commonly included apparatuses for demonstrating the hydrostatic paradox as well as models of hydraulic machines such as pumps, Archimedean screws, and Hero's fountains.