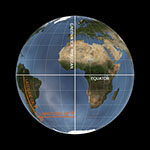 Coordinates needed to determine the position of an point on the terrestrial surface or on the celestial sphere. 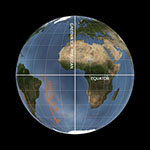 Latitude measures the angular distance of such a point from the equator. Many mathematical instruments (astrolabes, quadrants, sundials, and nocturnals) are designed to work at specific latitudes. The latitude is defined by measuring the altitude of the Sun or North Star above the horizon and comparing the value obtained with special numerical tables. 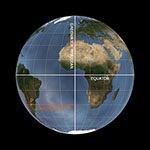 Longitude measures the angular distance of the point from the reference meridian (by convention, the one passing through Greenwich Observatory). While finding the latitude did not pose major problems, longitude defied accurate determination for centuries. This entailed immense difficulties, most notably in sea navigation. After the discovery of the New World, the need for an efficient method for finding the longitude became ever more urgent. Prizes and incentives were promised by the seafaring powers to whoever would come up with a practical solution. Galileo (1564-1642) considered using the periods and eclipses of Jupiter's satellites to calculate longitude at sea with precision. His method, based on the telescopic observation of the positions of Jupiter's satellites and on the use of the Jovilabe and the clock, aroused great interest from the Spanish monarchy and, later, from the States General of the United Provinces of Holland. Galileo conducted lengthy negotiations with the representatives of the States General over the sale of his method, which could have dramatically facilitated orientation at sea. The States General offered him a gold crown that Urban VIII (1568-1644, Pope from 1623) expressly forbade him to accept. After a series of fruitless attempts, the solution was found by John Harrison (1693-1776), who developed a precision chronograph that allowed a determination of the longitude from a comparison between the local time and the time of the place of departure (whose known longitude was recorded by the sea chronometer). The hour difference instantly provided the longitude, as each hour of difference corresponds to 1/24 of 360°, i.e., 15°.