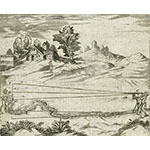 Instrument for gauging the vertical or horizontal orientation of a line or plane. Sometimes also used to measure small slopes. It can be either a stand-alone instrument or an accessory to another device, particularly a surveying apparatus. The first and simplest version consisted of a rod holding a plumb line. The rod was suspended to a small rope tied between the two points to be leveled. This apparatus, which could be used only for short distances, was replaced by a viewfinder with notches at both ends. The bubble level, still in widespread use, was invented in France in 1666.