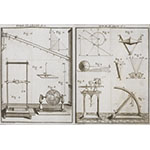 Branch of physics that studies the motion (kinetics and dynamics) and equilibrium (statics) of bodies. The origins of mechanics go back to earliest antiquity. It began to develop into a scientific discipline in the Greek world, particularly with Aristotle (384-322 B.C.E.) and Archimedes (287-212 B.C.E.), who subjected many problems of statics to a rigorously geometrical treatment. The Middle Ages saw significant advances, most notably thanks to the scientia de ponderibus [science of weights], which reached its apogee in the twelfth-fourteenth centuries. Later, Galileo (1564-1642) made a crucial contribution, being the first to establish the laws of uniformly accelerated motion and the parabolic trajectory of projectiles. The eighteenth and nineteenth centuries witnessed a massive diffusion and development of mathematical and experimental mechanics. The latter branch was marked by a proliferation of manuals and demonstration devices.