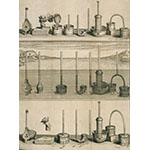 The only metal occurring in a liquid state at room temperature. Of a lucid white-silver color, it is very mobile (hence the name "quicksilver"). Because of its high specific gravity (about 13 times that of water) it has been commonly used—ever since Torricelli's first experiment in 1644—in barometers. If lighter substances were used, the barometric tubes would need to be of considerable length and thus become unwieldy. Atmospheric pressure at sea level exerts an average force equivalent to the weight of a mercury column about 760 mm high. Since the mid-seventeenth century, mercury has also been used as a thermometric liquid, as it expands proportionally to temperature; however, it cannot measure extremely low temperatures, as it freezes at about -38.8 degrees centigrade.