The term presentation applies to the first large fetal part to make contact with the superior pelvic strait.

Occurs when the fetus engages face-first in the superior strait. In the past, attempts were made to rotate the fetus manually into a breech presentation or a vertex presentation. François Mauriceu (1637-1709) believed that the face-first presentation should be transformed into a vertex presentation by introducing the hand into the birth canal; William Smellie (1697-1783) regarded this presentation as an anomaly. Lorenzo Nannoni (1749-1812), in his Trattato di ostetricia (1785), stated that the face-first delivery was normal. However, fetal mortality was 15-20% in 1870 and there were risks of ecchymosis and phlogosis (bruising and inflammation) to the eyeballs, and of swelling at birth.

Delivery is normal or physiological when the fetus is in a vertex or occipital presentation (90-95% of the time). Cephalic presentation can also be deflected (c. 1.3% of the time) in the brow (bregma), forehead, and face variants. 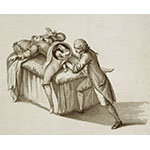 In the transverse presentation the fetus lies horizontally, its back facing up or down. This type of situation is rather rare (2%) and occurs more often in multiple births because of tone loss in the uterine-abdominal walls, which prevents the fetus from shifting to a longitudinal position. A complication associated with this type of birth is the prolapsus of the umbilical cord: in transverse presentations, the umbilicus (navel) is near the uterine orifice and the presented part is high. The first cases described with certainty date from the early twentieth century. Today, Cesarean section is the prescribed procedure for this presentation. 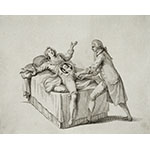 Breech presentation occurs when the part presented at the pelvic entrance lies caudally with respect to the iliac crests of the fetus, i.e., the buttocks and both feet (complete breech) or only the buttocks or one or more parts of the inferior limbs (incomplete breech: buttocks, knees or foot first).

Hippocrates (c. 460-370 B.C.E.), Pliny (c. 23-79) and Celsus (1st C.) regarded a fetus in breech presentation as impossible to deliver. In antiquity, breech-born children were called agrippi, meaning "delivered with difficulty" (aegre parti). Agrippa and Nero were said to have been born in this way. Until the time of Ambroise Paré (late sixteenth century), physicians were advised to position the head facing down and turn the presentation into a cephalic presentation. This procedure caused massive mortality. In the early nineteenth century, Francesco Asdrubali (1756-1832) noted that the causes of the extremely high mortality rate included the extraction of the head and fetal asphyxia. Breech presentations account for c. 3.6% of deliveries: buttocks present first in two-thirds of cases, knees and feet first in the remaining third.