Illuminated objects diffuse the light they receive, making themselves visible. If, however, their surface is very smooth rather than rough, the light is deflected indiscriminately, and the surface acts as a simple reflector. The optical phenomena that occur in such cases are reflection and refraction. 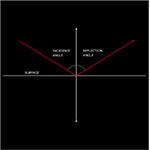 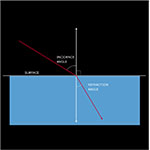 Deviation of the light rays that occurs on the surface separating two different media (for example, a pond surface that separates air from water). The ray that meets the surface is called incident ray; the ray that spreads in the second medium, after passing through the separation surface, is called the refracted ray. The incidence angle (i), i.e., the one formed by the perpendicular to the surface and the incident ray, and the refraction angle (r), i.e., the one formed by the perpendicular and the reflected ray, lie on the same plane and are linked by the relationship: sin i / sin r = n. The value of n is called the refraction index of the second medium relative to the first, and is a constant typical of the pair of materials. If the first medium is vacuum, n is called the absolute refraction index. When the incidence angle is greater than the refraction angle, the second medium is called more refractive than the second, and vice versa. If the incidence angle is zero, the ray experiences no deflection whatever. As a rule, gas refraction indexes are close to unity (for air, for example, n = 1.000293); those of liquids and solids vary between about 1.3 and 2.8; those of optical glass range from about 1.5 to 1.7. The refraction index varies with the wavelength of the incident ray. Hence, in a beam of polychromatic light, the single spectral components are refracted at different angles, giving rise to the phenomenon of dispersion, responsible for chromatic aberration in lenses. 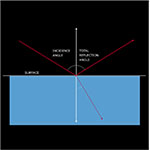 In the passage from a less refractive optical medium to a more refractive one, a light ray is always refracted; the opposite, however, is not always the case. There is a specific incidence angle, called limit angle, beyond which a light ray re-emerges instead, being totally reflected on the separation surface between the two media. The value of the limit angle is determined by the refraction law sin i / sin r = n. Indeed, there exists a specific value of the incidence angle i, for which the refraction angle r equals 90°, in other words, the refracted ray runs parallel to the separation surface between the two media without crossing it. For ordinary glass (n @ 1.5), the limit angle is about 42°. The phenomenon of total reflection is applied in prism-making.