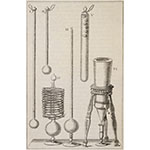 The Accademia del Cimento used different thermometric scales, whose lower reference point was the temperature of melting ice. On the 50-degree thermometer—the meteorological instrument of choice—that point was set at 13.5 degrees. The maximum (and purely empirical) value was defined as the level reached by acquarzente [alcohol] in a thermometer exposed to the summer sun. In practice, the alcohol in a 50-degree thermometer nearly always reached about 40 degrees.

Other variants used the centigrade scale (so called because it was divided into 100 parts), the 30-degree scale, and the 60-degree scale, whose maximum and minimum points were adjusted proportionally. The degrees measured by the thermometers of the Accademia del Cimento thus differed from the standard degrees later defined by Anders Celsius (1701-1744), Daniel Gabriel Fahrenheit (1686-1736), and René-Antoine Ferchault de Réaumur (1683-1757).