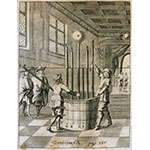 In a letter of June 11, 1644, Evangelista Torricelli (1608-1647) reported the following experiment to his correspondent, Michelangelo Ricci (1619-1682). Torricelli took a glass tube two braccia (c. 115 cm) in height, open at one end, and filled it with mercury. He then turned the tube upside down. Keeping the open end closed with his finger, he placed the tube upright in a bowl full of mercury, with the open end facing down. When he removed his finger from the opening, he observed that the mercury column descended, stopping at a height of 1 1/4 braccia (c. 70 cm). Torricelli saw this phenomenon as evidence that the descent of the mercury column was blocked by resistance from the atmospheric pressure on the surface of the mercury in the bowl. He observed that the height of the column varied with temperature changes. He also assumed that a vacuum remained in the closed end of the tube after the descent of the mercury. This claim sparked a long and heated dispute between those who proclaimed the existence of the void and those who followed traditional Aristotelian teaching, which denied the possibility of the vacuum.