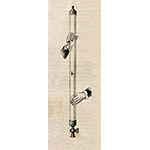 The analysis of vacuum dates back to ancient Greece. Its existence was defended by Democritus (5th C. B.C.E.), whereas Aristotle (384-322 B.C.E.), while describing the universe as finite, staunchly denied that vacuum lay beyond its confines. Moreover, for Aristotle and his disciples, air had no weight and exerted no pressure.

In the Middle Ages, many peripatetics (Aristotelians) found it hard to reconcile the thesis of the logical impossibility of vacuum with Church dogmas. In the thirteenth century, scholastic philosophers and theologians challenged this concept, which they saw as the negation of divine omnipotence: if God had so wished, he could have produced vacuum. However, they replied that vacuum could not be produced in Nature with "natural" forces. Elaborating on the concepts of Aristotle's Physics, some medieval authors developed the theory of Nature's horror vacui [abhorrence of vacuum]: an inherent repugnance toward vacuum led Nature to employ all means to prevent its occurrence.

Among the first to propose innovative ideas on vacuum and air pressure was the Dutchman Isaac Beeckman (1588-1637). He accepted the existence of vacuum and recognized that air exerts pressure in every direction. Beeckman communicated these views to the French philosopher René Descartes (1596-1650), who vigorously denied the existence of vacuum. A lively, interesting discussion ensued between the two men.

One of the major contributions of Evangelista Torricelli (1608-1647) was to plunge the horror vacui theory into a final crisis. In a very famous experiment performed in Florence in 1644, Torricelli demonstrated not only that Nature did not abhor vacuum, but that vacuum was extremely simple to produce. The Torricellian experiment had epochal consequences. The discovery of vacuum was a deep scientific, philosophical, and cosmological trauma.

The improvements in the air pump fostered a better understanding of the physical nature of air; its chemical nature was not grasped until later. In pneumatics, the term vacuum denotes the absence of gas, for example in a glass bell-jar evacuated by means of a pump. We now know that absolute vacuum—i.e., the total absence of gas molecules in a vessel—is unattainable even with the most sophisticated modern pumps, and that an "empty" space still contains many millions of molecules. What is commonly called "vacuum" therefore refers to a state where the pressure is lower than normal atmospheric pressure.