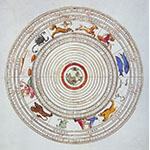 Belt of the celestial sphere bounded by two circles parallel to the ecliptic at 9° to the north and 9° to the south of it. Divided in 12 parts of 30° called signs, each named after a zodiacal constellation: Aries, Taurus, Gemini, Cancer, Leo, Virgo, Libra, Scorpio, Sagittarius, Capricornus, Aquarius, and Pisces. In reality, these signs carry the names of the constellations with which they coincided about 2,000 years ago. Today, because of the precession of the equinoxes, the constellations have moved eastward by some 30°. In practice, there has been a shift of about one position between the signs of the zodiac and the corresponding constellations. The twelve parts of the zodiac designated by the signs are known in astrological language as "houses," which transmit influences (varying from one sign to another) to human beings and nature. All the apparent paths of the Sun, Moon, and planets (except Pluto) lie inside the zodiac belt.