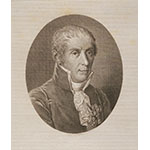 Born in Como, Volta came from a family of the Lombard aristocracy. His scientific interests developed in his youth, through the study of the works of Petrus van Musschenbroek (1692-1761), Jean-Antoine Nollet (1700-1770), and Giambattista Beccaria (1716-1781). Corresponded at length with Beccaria and Nollet. In 1774, appointed director of public schools in Como and, the following year, professor of experimental physics at the Ginnasio in Como. In 1778, elected to the chair in experimental physics at the University of Pavia. In 1780, visited the Museo di Fisica e Storia Naturale of Florence and, from 1781 to 1783, went on a grand tour of Switzerland, Alsace, Germany, Holland, Belgium, and France, which gave him the opportunity to meet leading European scientists. In Paris, Volta actually worked for a few months with Pierre-Simon Laplace (1749-1827) and Antoine-Laurent Lavoisier (1743-1794). After Paris, visited London, Vienna, and Berlin. In 1785, named Rector of the University of Pavia. For his scientific contributions - which had by now been internationally recognized and qualified him as Italy's pre-eminent physicist - Volta was awarded the prestigious gold Copley Medal by the Royal Society of London in 1794. Served in many distinguished public positions and was a member of the main Italian and European institutions and academies. Made a vast number of observations on electricity and the nature of gases. Invented the electrophorus and the electric eudiometer; improved the electroscope and condenser electroscope. His analysis of Luigi Galvani's (1737-1798) experiments on animal electricity led him to invent the battery (1800), the first generator of non-instantaneous electric current (i.e., unlike the instantaneous current from electrostatic machines). In 1801, gave a demonstration in Paris of the research that had preceded his invention. The event was attended by Napoleon I (1769-1821), who awarded him a gold medal. In 1805, the French Emperor granted him an annuity and named him Knight of the Legion of Honor; in 1809, Napoleon made him a Senator of the Kingdom of Italy and, the following year, a Count. After Napoleon's fall, the restored Austrian government appointed him director of philosophy studies at the University of Pavia. In 1819, he retired from public life to Como, where he died on March 5, 1827.