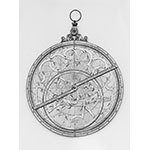 From the third century B.C.E. to the present, the term astrolabe (in Greek astrolábon, from astron + lambánō = star-taking/star-carrying) has been used to describe often widely differing instruments. They range from the large armillary instruments for determining the positions of the celestial bodies, such as the armillary astrolabe of Claudius Ptolemy (2nd C. C.E.), to medium-sized and compact instruments used for astronomical computations and navigation: the planispheric astrolabe, the universal astrolabe, the Rojas universal astrolabe, and the nautical astrolabe. 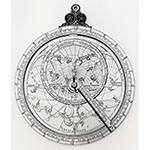 The planispheric astrolabe is the most important and versatile instrument made in antiquity for the analogical performance of astronomical computations that would otherwise have been long and complex. Some scholars attribute its invention to Hipparchus of Nicaea (2nd C. B.C.E.), who was familiar with the stereographic projection used to construct it. However, in the Commentary against the phenomena of Aratus and Eudoxus, Hipparchus used the projection to build an anaphoric clock that, albeit similar, is not a planispheric astrolabe. Three centuries later, Ptolemy described stereographic projection in the Planisphere, in which he alluded to a horoscopic instrument fitted with a disk (rete)—possibly a true planispheric astrolabe. The instrument was definitely known to Theon of Alexandria (4th C. C.E.), who discussed it in a treatise handed down through John Philopon (6th C. C.E.) and Severus Sêbôkht (7th C. C.E.).

From Alexandria of Egypt, the instrument spread to Byzantium and the Islamic world. There it was developed in all possible variants: from the wooden device used by the mosque astronomer for finding the direction of Mecca and the hours of prayer from the altitude of the Sun and the stars, all the way to refined instruments crafted in silver and precious stones, destined for princely collections. Islamic rule in Spain and Sicily, as well as the many translations of Arabic texts made in the twelfth century—including the treatise on the planispheric astrolabe by the astronomer of Jewish origin Mâshâllâh (died c. 815)—made the instrument familiar by the tenth century across Europe, where it met with clear success.

It was not until the seventeenth century, with the construction of accurate mechanical clocks and the development of new calculation methods, that the instrument became obsolete—without, however, falling into oblivion. Even today, there are celluloid astrolabes on the market that allow beginners to identify stars and constellations.

The tympanum of a planispheric astrolabe carries the grid of the observer's altazimuth coordinates as a polar stereographic projection. Since the distance between the zenith and the celestial pole depends on the geographic latitude, the entire grid needs to be reset as soon as the observer moves a few degrees north or south. A single planispheric astrolabe should therefore be fitted with as many tympanums as there are localities of different latitudes in which it is to be used.

This drawback was eliminated in Toledo by introducing two new types of astrolabe based on an equinoctial rather than a polar stereographic projection. Taking an equinox as the projection point and the plane of the solstitial colure as the projection plane, the celestial equator and the horizon of the locality become the diameters of the instrument. The celestial poles, as well as the zenith and the nadir, form two pairs of diametrically opposite points lying on the circular edge of the instrument. Instead of changing the tympanum, the traveling observer resets the distance between the zenith and the celestial pole by rotating the rete around the mater.

A first model of universal astrolabe, devised by 'Alî ibn Khalaf al-Shakkâz (9th C.), remained virtually unknown and was reinvented in Aleppo by Ibn al-Sarrâj (14th C.). The mater carries the altazimuth coordinates of the locality; the rete is divided into two halves, the first carrying the equatorial-coordinates grid, the other a set of star indicators. For computational convenience, the ecliptic rotates 90° around the celestial axis and is materialized by two graduated arcs.

A second version of universal astrolabe, known as açafeha or saphaea Arzachelis (= al-Zarqâlî's plate), was developed—as its name indicates—by the astronomer Abû Ibrâhîm ibn Yahyâ al-Zarqâlî (c. 1029-c. 1087). It enjoyed greater success. Known in Cairo and Damascus, it was publicized in Europe by Reiner Gemma Frisius (1508-1555) in De astrolabe catholico (1556). The mater carries the equatorial-coordinates grid and the ecliptic, in the form of a diameter inclined to the celestial equator. The rete is replaced by a graduated alidade fitted with a graduated perpendicular cursor. 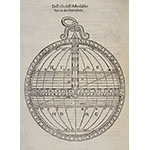 In practice, universal astrolabes are not very convenient or versatile. Indeed, while a small number have survived, the variety of their designs bears witness to their makers' continuous efforts to emulate the advantages of the planispheric astrolabe. 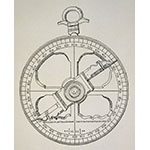 Although both these instruments are called astrolabes, the nautical astrolabe hardly resembles the planispheric astrolabe; besides the complexity of their shapes, the only common parts are the mater with graduated limb, the suspension ring, and the alidade. In fact, the nautical astrolabe was used not for astronomical calculations, but to measure the zenith distance of the Sun or a star—most notably the Pole Star—during its transit over the meridian. Knowing the declination (distance from the celestial equator) of the celestial body observed on that given day, the navigator could determine the ship's latitude through addition or subtraction.

To facilitate observation in adverse atmospheric conditions, the mater of the nautical astrolabe, made of bronze, was thick, heavy, and abundantly perforated. Its weight kept the instrument perpendicular to the ground despite the ship's pitch and roll; the perforations ensured that in a strong wind the instrument would not behave like a sail flapping in the hands of the observer, which would make it impossible to take stable aim at the chosen celestial body.

Initially carried on almost all the great ships (particularly Spanish) from the fifteenth to the seventeenth centuries, the nautical astrolabe gave way instruments that were easier to handle and more precise: first the cross-staff (balestriglia), then the back-staff (ottante), and lastly the modern nautical sextant.