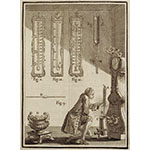 The thermometer is an instrument for measuring temperature whose development began in the early seventeenth century. Thermometers are based on the property of gases, liquids, and solids to expand or contract with changes in temperature. Other thermometer designs are based on electrical phenomena.

Instrument to measure heat and cold invented by Galileo Galilei (1564-1642) during his stay in Padua. Santorio Santorio (1561-1636) made a similar instrument in Venice in 1612. A precursor of the modern thermometer, the thermoscope consists of a glass vessel with a long neck. The vessel was heated with the hands and partially immersed, in an upright position, in a container full of water. When the heat of the hands was taken away, the water was observed to rise in the thermoscope neck. The experiment showed the changes in air density produced by variations in temperature. 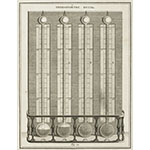 Thermometer in which temperature variations are indicated by changes in the volume of a liquid. The latter is placed in a bulb, and expands (or contracts) in a capillary tube. The liquid—alcohol, mercury, toluol, etc.—was chosen in accordance with the range of temperatures to be measured.

Thermometer in which temperature variations are generally indicated by the changes in length of one or more metal rods.

One of several kinds of thermometer (liquid, metal, etc.) whose readings are recorded by a pen on a clockwork-driven drum carrying a ribbon of graduated paper. Also called self-registering thermometer. 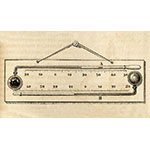 Thermometer in which the maximum and minimum temperatures reached in a given time interval are memorized by means of various devices, such as a quantity of liquid poured into a vessel, or the displacement of tiny cursors in the capillary tubes.

Thermometer in which temperature variations are indicated by the expansion and contraction of a gas. Laboratories use this type of apparatus for precision measurement. 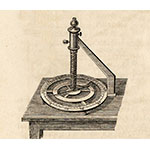 Thermometer indicating temperature variations by means of electrical current flowing through a circuit in which a galvanometer is inserted. The sensitive element can be an electrical resistance whose value changes with temperature, or a thermocouple (formed by two soldered metals), which also generates specific quantities of current at different temperatures. 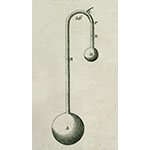 Thermometers capable of measuring or indicating the (generally small) difference between two temperatures. Often called thermoscopes, they were commonly used to study thermal radiation. They consist of a capillary U-tube closed at both ends by two glass bulbs. In the tube is inserted a drop of liquid serving as an indicator. When one of the two bulbs (which is often blackened) is exposed to a source of thermal radiation, the air in the bulb expands, pushing the drop along the capillary tube toward the second bulb.