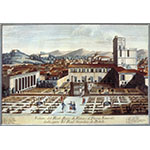 Founded in Florence by Peter Leopold (1747-1792), Grand Duke of Tuscany, and opened to the public in 1775 on Via Romana, near the Palazzo Pitti. Its first director was Felice Fontana (1730-1805). All the scientific material from the Medici collections was gradually moved into the new Museum; to this nucleus were added the new machines commissioned by the Grand Duke of Lorraine and the collections acquired at his initiative. After Peter Leopold became Emperor and moved to Vienna (1790), the Museum went into decline. In 1841, the Tribuna di Galileo was opened. The oldest instruments were put on display there, in particular those made and used by Galileo (1564-1642). Following the unification of Italy, the Museum collections were dismantled to provide books and collections to the Faculties of the new Regio Istituto di Studi Superiori [Royal Institute of Higher Education].