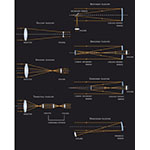 The first Italian word for "telescope" or, more accurately, "spyglass," was cannocchiale. It is a combination of cannone—a generic term for a tube used by scouts to narrow their field of view—and occhiale (eyeglass lens). The instrument was sometimes called tubo ottico (optical tube). The first telescopes comprised two lenses at either end of the tube: the objective lens (objective), facing the object to be observed, and the ocular (or eyelens) near the eye. In Italian, these instruments, especially if large or fitted with complex optical systems, are also referred to as telescopi, from the Greek tēle ("far") and scopeo ("I see"). The term telescopio—from which the English "telescope" is derived—was coined in 1611 by Prince Federico Cesi (1585-1630), founder of the Accademia dei Lincei. Telescopes are classified into two categories: refracting (or dioptric) and reflecting (or catoptric). 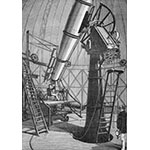 Telescopes are called refracting telescopes (or refractors) when the optical system facing the object to be observed, i.e., the objective, is composed of lenses. The oldest telescopes are of this type. In addition to those of Galileo (1564-1642), they include the instruments devised by Torricelli (1608-1647), Campani (1635-1715), Divini (1610-1685), and others. The refractor was gradually perfected to increase its power and reduce the effects of chromatic aberration. Some extremely long models were built. The use of refractors for astronomical observation ceased with the invention of the reflecting telescope, but they remained in use for terrestrial observations. Refractors have traditionally been classified into Galilean telescopes, astronomical telescopes, and terrestrial telescopes. 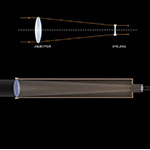 Characterized by the use of a negative (i.e., diverging) ocular (eyelens). In its simplest form, comprises only two lenses: the objective lens, which is plano-convex or biconvex, and the ocular, which is plano-concave or biconcave. The distance between the two lenses is equal to the difference between the absolute values of their focal lengths, and the magnifying power is given by the ratio of the focal lengths of the objective and the ocular. The advantage of the Galilean telescope is that is provides an upright image without requiring an erector-lens system. Its disadvantage is the extremely narrow field of view (moreover, in the Galilean design, the use of a diaphragm on the objective reduces not only brightness but also the field of view); far from being uniform, the brightness of the field of view gradually decreases from the center to the edge. Another drawback that spelled its rapid abandonment by astronomers is the impossibility of fitting the focal plane with a micrometer, i.e., a device for determining the angular size of the objects observed. The Galilean telescope owes its name to Galileo, who, while not its inventor, was the first to build copies powerful enough for him to make his famed astronomical discoveries. It is also known, particularly in the English-speaking world, as the Dutch telescope—a term reminiscent of Dutch tube, an early expression sometimes used to describe this type of instrument. Because of its serious limitations discussed above, the Galilean optical design—with rare exceptions—was abandoned for astronomical use by the mid-seventeenth century. However, until the advent of prism telescopes, it was applied in the construction of binoculars. Achromatic objectives and compound oculars were used to reduce the heavy aberrations of the two-lens system, which seldom exceeded five magnifications so as to avoid too narrow a field of view. The most sophisticated models had an objective actually consisting of a cemented triplet and an ocular also composed of three cemented elements (a biconvex lens placed between two biconcave lenses), with an overall negative optical power. Today the Galilean telescope is used only for low-cost theater binoculars (with apertures of 30-40 mm and magnifying powers of 3-4), and for viewfinders in some models of still cameras. 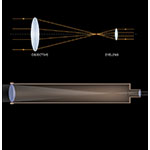 Characterized by the use of a positive (i.e., converging) ocular. In its simplest form, comprises only two plano-convex or biconvex lenses, one serving as the objective, the other as the ocular. To put it succinctly, the ocular functions as a magnifying lens that enlarges the (real) image formed by the objective. The distance between the two lenses is equal to the sum of their focal lengths, and the magnification is given by the ratio of the focal lengths of the objective and the ocular. The astronomical telescope produces upside-down images. This drawback can be eliminated by inserting an erector-lens system; it is largely offset by a somewhat broader and uniformly brighter field of view than the one offered by the Galilean telescope. Unlike the latter, the Keplerian design also allows the focal plane to be fitted with a micrometer, i.e., a device for determining the angular size of the objects observed. The instrument's designation as "astronomical" is due to its widespread use in astronomical observation, for which image inversion is not a significant drawback. Indeed, the Keplerian telescope totally replaced the Galilean model by the mid-seventeenth century. The instrument is also known as "Keplerian" because its optical arrangement was first described by Johannes Kepler (1571-1630) in his Dioptrice, published in Prague in 1611. In common use, both terms are actually obsolete. Today, nearly all telescopes are fitted with converging oculars, combined, for terrestrial use, with an erector to provide an upright image. As a rule, therefore, the instrument type is specified only in the rare instances where a Galilean system is used (for example, in certain models of theater binoculars). 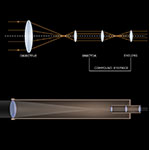 Astronomical or Keplerian telescope, i.e., with a positive ocular, which, being intended for the observation of terrestrial objects, is fitted with an erector to obtain upright images.

Before the introduction of achromatic objectives, telescopes with a single-lens objective were severely affected by chromatic aberration. After some theoretical attempts—primarily by Marin Mersenne (Harmonie Universelle, Paris, 1636)—several authors, beginning in the 1660s, advocated the use of mirrors to compensate for that drawback. When reflecting surfaces are used, light rays are not refracted, so the images they produce are effectively free of chromatic aberration. Moreover, by choosing appropriate surface forms, one can even eliminate geometrical aberrations and thus obtain optically correct images. Reflecting telescopes, also called reflectors, use as an objective a concave mirror called primary mirror (to form a "real" image, the objective of any optical instrument must always be converging; convex mirrors are diverging) and one or more smaller, suitably shaped mirrors called secondary mirrors. The most common types of reflector use a parabolic-section primary, which, being free of spherical aberration and other geometrical aberrations, provides chromatically and geometrically perfect images. 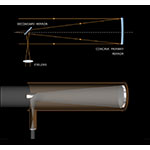 Reflecting telescope named after its inventor Isaac Newton (1643-1727), who built it in 1668 (a second copy, which survives, was presented to the Royal Society in 1672). The Newtonian telescope consists of a parabolic primary mirror, which serves as the objective, and a small plane elliptical mirror located on the optical axis and inclined at 45° to the axis. As the secondary mirror is plane, it does not alter the parabolic's focal length; its purpose is merely to deviate the image laterally, preventing the observer from blocking the line of sight between the object and the primary mirror. In Newtonian instruments, the eyepiece is therefore placed near the upper end of the tube. The secondary mirror masks the central part of the parabolic, but this has no significant effect on image quality provided that the image size—which increases with the relative aperture—does not exceed about 1/3 of the primary mirror's size: beyond that ratio, the images lose sharpness. Before the introduction of silvering, the extremely low reflectiveness of mirrors (~60%) led some manufacturers to use as a deviating element a small right prism (despite its introducing a slight chromatic aberration) instead of the elliptical secondary mirror. One example of this solution is provided by the Newtonian telescope of Tito Gonnella (1794-?) of Leghorn, exhibited in Room XI. 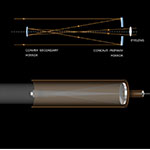 Reflecting telescope named after its inventor, the Scotsman James Gregory (1638-75), who described it in Optica Promota (London, 1663). The Gregorian telescope comprises a parabolic primary mirror, serving as the objective, and a concave, elliptical secondary mirror located on the optical axis beyond the primary focal point (to be exact, at a distance slightly greater than the sum of the focal lengths of the two mirrors). In the Gregorian telescope, as in the Cassegrain telescope, the image forms behind the parabolic mirror, in which a hole has been drilled at the appropriate spot, and the eyepiece is therefore placed on the instrument's breech. The Gregorian telescope has the particular property of supplying an upright image and can therefore also be used for terrestrial observations without the aid of an erector. As a result, this combination, now entirely abandoned, was widely disseminated in the mid-18th C., before the introduction of achromatic telescopes. Famous examples include the Gregorian telescopes made by the English optician James Short (1710-68). Among the several hundred that he manufactured was a model with an 18-inch aperture and a 12-foot focal length—enormous dimensions for the time. 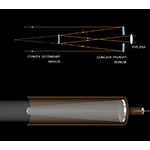 Reflecting telescope named after its inventor, the Frenchman Laurent Cassegrain, who published the design in early 1672. The Cassegrain telescope comprises a parabolic primary mirror, serving as the objective, and a hyperbolic-section convex secondary mirror located on the optical axis just in front of the primary focal point. In the Cassegrain telescope, as in the Gregory telescope, the image forms behind the parabolic mirror, in which a hole has been drilled at the appropriate spot, and the eyepiece is therefore placed on the instrument's breech. The hyperbolic secondary mirror modifies the divergence of the light rays from the primary mirror, thus multiplying the mirror's focal length. For this reason, the Cassegrain combination, still widely used, offers the advantage of providing long equivalent focal lengths—and hence high magnifications—with relatively short, compact tubes. 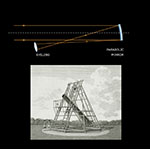 Optical combination named after the famous astronomer William Herschel (1738-1822), who, among other achievements, discovered the planet Uranus in 1781. Herschel used the system to construct his telescopes, which were gigantic for his day. The Herschelian telescope simply consists of a parabolic mirror inclined with respect to the optical axis so as to form the image laterally, near the top of the tube, where the observer is located. In other words, the Herschelian telescope is a Newtonian telescope without a deflecting mirror. Before the introduction of silver coating, the reflectiveness of molten-metal mirrors (specula) was extremely low (~60%), prompting Herschel to remove all further reflecting surfaces. Since the parabolic mirror works off-axis, the image suffers from geometrical aberrations. However, for relatively long focal lengths (1/10 – 1/20), such as those used by Herschel, the aberrations were negligible and largely offset the drastic fall in luminosity that the introduction of a second mirror would have generated.