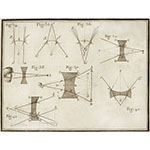 A lens (from the Latin lens, lentis = lentil) is an optical device made of transparent material—usually glass—bounded by two spherical surfaces or by one spherical surface and one plane surface. If the lens displays a concave side and a convex side, it is more accurately known as a meniscus. Lenses (and menisci) can be converging, i.e., with positive optic power, or diverging, i.e., with negative optic power. Converging lenses, as their name indicates, cause light rays from a source located at infinity to converge toward a point known as the focal point (from the Latin focus, foci = fireplace: the term derives from the fact that, by concentrating the sun's rays on bits of straw or paper, these ignite). When an object is placed between the focus and a converging lens, the viewing angle is widened, and the object appears upright and enlarged. Ordinary magnification glasses are, in fact, converging lenses. In diverging lenses, instead, the light rays from a source located at infinity are deviated in such a way that it is their extensions that converge on a point: the latter is known as a virtual focus. An object placed between a diverging lens and its focus appears upright and reduced. To put it simply, the distance between the center of a lens and its focus is called focal distance (or focal length). It is determined by the curvature radii of the lens and by the refraction index of the material from which the lens is made. Lens power is expressed in diopters (D), which are defined by the inverse of the focal distance expressed in meters: for example, a lens with a focal length of 50 cm has a power of 2 D (= 1 / 0.5 m) if the lens is converging, or -2 D if the lens is diverging. The various combinations of surfaces—plane, concave or convex—generate the different types of lenses.

In a telescope, as in a microscope, the objective is the lens (or lens system) farther away from the eye. Objective lenses form a converging system, which receives light from a source and gives a true image of the object. 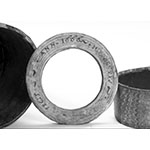 Lens (or lens system) fitted on many optical instruments. The observer places his or her eye near the eyepiece to examine the enlarged image of an object given by the instrument's objective lens. Among the more common eyepieces used in microscopes and telescopes is the one named after its inventor Christiaan Huygens: it consists of two plano-convex lenses whose plane faces are turned toward the observer's eye. An eyepiece composed of a lens system is called a "compound eyepiece."

Converging lenses are so called because they make a beam of parallel rays converge to a point, called the "focus." They are thicker in the center than at the edges; they can be biconvex, plano-convex or convexo-concave. Biconvex lenses have two convex faces; plano-convex lenses have a plane face and a convex face; convexo-concave (converging meniscus) lenses have a convex face and a concave face. Converging lenses are also called positive lenses because the focal distance is expressed by a positive number.

Diverging lenses are so called because they make a beam of parallel rays diverge. They are thicker at the edges than in the center; they can be biconcave, plano-concave or concavo-convex. Biconcave lenses have two concave faces; plano-concave lenses have a plane face and a concave face; concavo-convex lenses (diverging meniscus) have a convex face and a concave face with a smaller radius of curvature. Diverging lenses are also called negative lenses because the focal distance is expressed by a negative number. 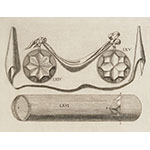 Prismatic lenses are generally converging lenses whose faces do not consist of spherical surfaces but of a variable number of small plane faces. Prismatic lenses were often used to make optical toys because of their property of multiplying the images of an object.