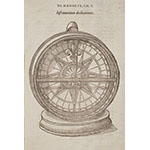 The magnetic compass is an orientation instrument that consists of a magnetic needle pivoting around its center and rotating freely on a horizontal plane. In the terrestrial magnetic field, the compass needle always indicates the magnetic north pole, which differs by several degrees from the geographic north pole. In some models it is the entire compass dial—engraved with the cardinal points and the windrose—that rotates on the central pivot: the direction is indicated by a reference mark in the compass box. There are many variant designs according to the purpose for which the compass is used. 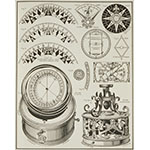 Compass mounted in such a way as to be consistently horizontal, even if the surface on which it rests is oscillating. To offset tilts, the compass is typically placed on a cardanic joint (gimbals). Gimbaled compasses are mainly used in navigation to dampen or cancel the effects of the ship's motion. 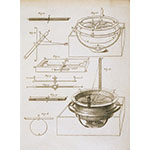 Known in China since the fourth century C.E., the mariner's compass was improved by the Amalfi seamen between 1100 and 1200. A card showing a windrose is placed under the magnetic needle. 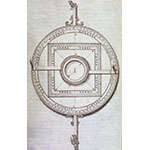 Instrument generally consisting of a circular plate with a compass and diopter (sight) at the center, and a scale of degrees around the circumference. The scale of degrees is sometimes arranged in four 90° sectors designating the four cardinal directions—or, more commonly, in eight 45° sectors designating the main winds: Tramontana, Greco, Levante, Scirocco, Ostro, Libeccio, Ponente, Maestro. The instrument, which basically derives from the back of the astrolabe, served to measure position angles or polar coordinates in surveying work. The surveyor would place a circular sheet between the plate and the sight. On the sheet were recorded the directions of the lines of sight and, for each line, the name of the targeted spot and its position angle in degrees. 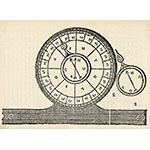 Also called a geologist's compass, this instrument is equipped with a pendulum clinometer to determine the slope as well as the direction of dip of geological strata. Typically, it is also fitted with the accessories needed for surveying: a sight and a windrose. 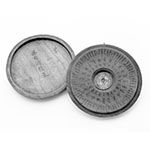 Geomantic compasses encapsulate the enormous complexity of Chinese thought; in more practical terms, they were supposed to indicate the relationships between the natural universe and human beings. The form and functions of the geomantic compass (luoban, or luojing)—still used in Hong Kong and Taiwan—have not changed in a thousand years (Song era). The instrument is round. At its center, under a small glass bell, is a magnetic needle suspended on a pivot. In keeping with the Chinese convention, the needle points south (as opposed to European usage, in which the reference direction has always been north). Around the center are placed concentric circles (ceng) of increasing diameter, divided into sectors. The customary number of circles is between 16 and 24, although compasses with up to 40 have been documented. Each ceng represents an aspect of Chinese cosmography. The geomancer—i.e., the person trained to use the compass for selecting an auspicious location on which to build a house or place a tomb—consults some of the ceng on the compass and then a manual. He can determine the point that each of the Five Elements (wood, fire, earth, metal, and water) has reached in its cyclical evolution on the chosen site; he will then be able to establish if the energy potential of the negative forces (ying) and positive forces (yang) is in the optimal ratio at the location. The geomantic compass was also used as a mining instrument, chiefly to determine the exact boundary of the areas to excavate.