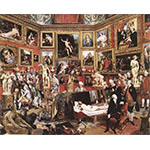 Cosimo I de' Medici (1519-1574) started a collection of works of art, coins, and armor in sixteenth-century Florence. His descendants added new works of art, scientific instruments, and natural curiosities. Among the most significant groups are: the instruments from Robert Dudley's (1573-1649) bequest; the objects produced in the Grand Duke's workshops; the globes; the telescopes; Galileo's (1564-1642) original instruments; and the material from the Accademia del Cimento. The Medici collections were incorporated into the Museo di Fisica e Storia Naturale, founded in 1775 by Grand Duke Peter Leopold of Lorraine (1747-1792).